The Gouldian finch is one of the most beautiful birds in the world, which is why the species is present in so many homes. They make great pets, not just because of their vibrant plumage but because they are shy creatures that do require much in the way of human attention.

If these birds are new to you, this is what you need to know about their history and origins:

1). First of all, the bird comes from Australia’s grasslands. Its discovery has been imputed to John Gould, a British ornithologist that named the bird in 1841 after himself and his wife.

2). The Gouldian Finch was introduced to Europe six years after Gould discovered it. The creature’s colors and temperament made it an immediate hit among bird enthusiasts. People started hunting, capturing, and trapping the birds in such massive numbers that their populations in the wild declined considerably.

This trend continued until the late 1960s. The Gouldian Finch was eventually classified as an endangered species but primarily in the wild. There were plenty of finches in captivity, and that is true today as well. 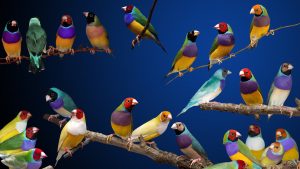 3). The widespread capture and sale of finches in the late 1800s and early 1900s has allowed viable breeding populations to explode in a number of regions outside Australia. The number of color mutations has also grown in response to the captive breeding that has happened over the years.

4). The mutations that have emerged as a result of captive Gouldian finch breeding tend to vary widely. Some mutations are only present in certain countries. For instance, the Australian yellow finch is only found in Australia. The blue-bodied Gouldian, on the other hand, exists in the larger numbers in the US.

5). As was noted above, these birds have reduced greatly in number. The most dramatic decline happened in the 20th Century. However, human activity is not the only cause. Diseases are also a contributing factor.

The birds are vulnerable to various illnesses and infections. One of the most destructive is the air sac mite, a parasite that did more to reduce Gouldian finch numbers in the wild than any other factor. 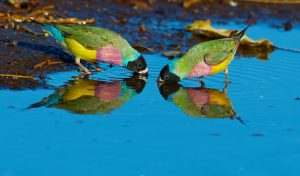 6). Besides the human factor and the role of infections, diseases, parasites, these birds have suffered greatly as a result of the alterations their natural habitats have undergone. This is especially true in Australia where fires continue to threaten their populations.

7). Some people do not realize that finches are social. They know that the birds do not appreciate human contact, and that is true. But that doesn’t make them anti-social. They enjoy interacting with their own kind.

Their disinterest in humans makes the creatures challenging to train. However, they are not necessarily difficult to keep. They are not affectionate but neither are they hostile. That doesn’t include situations where you force them to tolerate your touch.

In an ideal environment, one that is filled with other finches, they are calm, contented birds. They don’t need much besides seeds, water, and another finch they can mate with for life.  If you want one as a pet and need to know a gouldian finch price, a simple Google search will allow you to find out the average price as well as sellers who sell them.