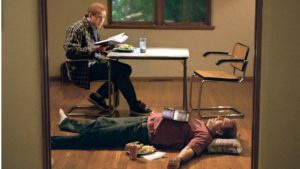 In this selection of movies, we learn some new facts about famous writers. We also get to imagine some things about their lives that may not be strictly true but help flesh out their characters. Most importantly, we find out that these famous writers faced the same dilemmas we all do in their everyday lives.

The 1997 movie “Wilde,” directed by Brian Gilbert and starring Stephen Fry in the title role, was nominated for four Golden Globe Awards.

The movie begins with Wilde’s visit in 1882 to Leadville in Colorado, as part of his USA lecture tour. Despite his flamboyance and manner, he surprisingly goes down well with his audience of local silver miners. On returning to London, Wilde marries Irish author Constance Lloyd. Over two years, they had two sons, after which they ceased to be sexually active after Robbie Ross (played by Michael Sheen) seduces Wilde and helps him accept his homosexuality.

Opening night of Wilde’s play, “Lady Windermere’s Fan,” Wilde meets poet Lord Alfred Douglas, a foppish individual, who is very handsome (played by Jude Law). The two had briefly met one year before. Wilde and Douglas become involved in an affair. They have an odd relationship where Douglas frequently employs rent boys, while Wilde plays the role of voyeur.

Douglas’ father (The Marquis of Queensbury) is not favorable towards Wilde and his son’s relationship. He makes this clear shortly before Wilde opened “The Importance of Being Ernest” when he publically demeans Wilde. Wilde retaliates by suing the Marquis of Queensbury for criminal libel. This results in Wilde’s homosexuality being exposed and Wilde prosecuted for Gross Indecency. Wilde is sentenced to two years hard labor. During his time in prison, Constance Lloyd, his wife, visits him and tells him that she would not divorce him.

However, she does say that she is taking his sons to Germany and that as long as he has nothing to do with Lord Alfred Douglas, Wilde is welcome to visit whenever he wished. Eventually, Wilde is released from prison and immediately heads off to Europe in exile. Many people advise Wilde to keep clear of Douglas. However, Wilde ignores this and eventually meets up with Douglas.

The 2001 Movie “Iris“ was directed by Richard Eyre and starred Kate Winslet and Judy Dench in the title role. The Movie won an Oscar.

Murdoch, played by Winslett, is young academic teaching philosophy at Oxford when she meets and falls in love with another professor John Bailey. There is a vast difference between the two characters, and Murdoch’s spirit and confident bearing is a complete contrast with the awkward Bailey.

The story is related through the older Bailey’s eyes (played by Jim Broadbent) and comprises a series of snippets from their life together. Murdoch is portrayed as a brilliant and vigorous young woman. The contrast between this and the snippets from Murdoch’s later life after Alzheimer’s disease has wrecked her is most poignant. We witness Murdoch slowly being lost to the disease until just a shell remains of what once was Iris Murdoch. It reaches the inevitable conclusion where Murdoch is totally reliant on John Bayley, who, as a devoted husband, carries out every task for the woman he loves. The movie concludes with her death.

The movie is based on two books written by John Bailey, Iris, and Iris & the Friends.

The 2009 Movie “Bright Star” was directed by Jane Campion and starred Abbie Cornish as Fanny Brawne and Ben Wishaw as John Keats.

The story relates the three-year romance between the 19th-century poet John Keats and Fanny Brawne. The story takes place in the final part of Keats’ life. It is 1818, and on the outskirts of London in Hampstead Village, the story begins. In one half of a house live Charles Brown, a poet, The other half of the house resides the Dilkes family. The Dilkes family is the link between The Brawne family and Mr. Brown. Mr. Brown and Fanny (the eldest daughter of the Brawne’s) do not like each other. Fanny thinks Brown to be an arrogant man who is incredibly rude. Brown thinks Fanny is a flighty girl who knows nothing except how to sew. She is actually quite skilled at sewing and makes all the fashionable clothes she wears.

Keats comes to live with his old friend brown, and when he meets Fanny, they both have a mutual attraction. The relationship takes a while to become a reality as Brown disliked Fanny and does his best to make sure they do not get attached. Keats, at the time, was a struggling poet and very insecure, making the relationship harder. Brown is not the only obstacle to the relationship. Brawne totally misunderstands the relationship between Keats and poetry, but she is impressed that Keats had been using his sick brother, and to get closer to him, asks him to teach her about poetry. The poetry brings them closer and fuels the romance. Mrs. Brawne rejects Keats as a potential suitor for her daughter because of his lack of prospects, then Keats develops the same illness that had killed his brother. There is no happy ending to this story as the lovers see their dream of marriage fade and the reality of separation forever.

The 2018 Movie “All Is True“ was directed by Kenneth Branagh, who also played the lead role.

This movie explores the latter part of the life of William Shakespeare. It begins in 1613 as Shakespeare decides to return home to Stratford -Upon-Avon and face his family, who have been somewhat neglected. This change in direction is a consequence of the “Globe Theater” being razed by fire. Shakespeare is truly devastated at the Globe’s loss, and he now has to try and mend fences with his wife and daughters, still haunted by the death of his only son.

On reaching home, his wife, played by Judi Dench, suggests that he should sleep in the best bed in the guest room. He has returned so infrequently over the years that she actually sees him as a guest. The movie analyzes these relationships and supposedly allows a peek into the life of Shakespeare. The odd thing is that despite the movie being called “All Is True,” there is very little in the movie that is true.

The 2007 Film “Becoming Jane” was directed by Julian Jarrold.

This is Jane Austin’s story that covers events in her life before she gained fame. In particular, her romance with a young Irishman.  The lead role was played by Anne Hathaway who in an interview had taken time off to do an Oregon bathroom remodel small with her husband, but since the role was too good to pass home she put her home renovation project to the side.

The story commenced in 1795 with Jane Austin, an opinionated twenty-year-old emerging writer. She has dreams of stepping out from the conventions of the time and follow her dreams, which do not fit in with the prejudices and norms of the time in which she lived. Her parents are searching for a wealthy and successful husband to assure her future position in society and are considering Mr. Wisley as a suitable match. However, Jane is making her own connections, and when she meets Tom Lefroy, who is everything that her parents are not looking for, there are sparks.

The couple knows that if they pursue their wish to be married, they will create a furor that risks everything they have. They will lose friends, family, and fortune. It is a true period piece that attempts to bring to life the rebel that was Jane Austin.

The 2017 Movie, “The Man Who Invented Christmas,” was directed by Bharat Nalluri and followed the creation of the famous work “A Christmas Carol.”

When we think of Christmas, the story “Christmas Carol” comes to mind, and in this movie, we follow a story about how it may have been written by Charles Dickens. It was 1843, and the now famous British novelist was at a pretty low point in his writing career. It happens, and he had three failures, one after the other, and funds were getting low.

To resolve his dire situation, he decided to write a Christmas Story and then self publish it. He had a limited time to get this done(just two months). Just as he begins what would be a difficult task in the best of times, his estranged parents decide to come and stay with him. Not an enjoyable situation, even if he had nothing else to worry about.

His father’s financial irresponsibility that had ruined his childhood was still fresh in his mind, which was not particularly helpful when already under such pressure. This results in a massive case of writer’s block. Whatever he tries, he cannot shift it, and things were not looking good. He tries to work out his issues in the dialogues with the characters he has written, particularly in the conversations with Ebenezer Scrooge.

Through this unconventional method, he manages to finish the story, “A Christmas Carol.” Of course, we all know how successful it all turned out to be.

This Movie, “Pandaemonium,” from 2000, tells the relationship between the poets Samuel Coleridge and William Wordsworth. Directed by Julien Temple

The movie analyses the relationship between two of our most famous poets Samuel Taylor Coleridge and William Wordsworth. the two poets lived during the same era and same tumultuous political events. It is a drama that has friendship and rivalry at its core with a political overlay set in a period that included the french revolution and government repression.

The film seems overtly pro Coleridge in this story, and the author of Rime of the Ancient Mariner, and Kubla Khan is excused his drug use. To Wordsworth, there are hints of an incestuous relationship with his sister.

It is a complex scenario and an attempt to explore these characters in depth.

Most of the writers featured in this selection of movies are from past ages where public opinion was not so liberal as today. These individuals were often seen as people living outside of proper society, and some, most notably Oscar Wilde, suffered dearly for it. Yet all of them were aware of public pressure to conform, to become more connected with society. Perhaps it was the fact that these characters lived on the edge of society that their creativity was released. Often very little is actually known about the private lives of writers, and the huge gaps have to be filled with material created from what others think may have happened, so we can not watch the movies as a firm biography. More of a suggestion of what the see complex relationships may have been.